History Behind the Cheddar Bake

In the late 1970’s Carey opened two restaurants in Charleston: One on Sam-Rittenberg Ave., and one on Rivers Ave.  Ms. Anne, a Cook at the Rivers Ave. store stood out.  She helped open the store, and never missed a day of work.  Ms. Anne was known as the “head Cook” as she ran the kitchen.  At the time, French fries and baked potato were the only two sides.  When Tim, Carey’s son, was making his weekly Friday night visit, she insisted that he taste a “Cheddar-bake.”  Tim added it to the menu that night, and it instantly became a hit.  Years later, customers from Charleston dining in Savannah, demanded it in Savannah.  Ms. Anne brought her recipe 60 miles south, and we’ve had Cheddar Bakes ever since.

Why do I like the Cheddar Bake so, so much?

Because it’s an awesome side with ANY meal!  The cheddar bake is basically a twice-baked potato, or what people commonly call a loaded baked potato.

Sour cream butter, paprika and of course cheddar cheese.  It’s served hot, of course.  I like to dip mine in barbecue sauce, or even boom-boom sauce to add that spicy flavor.  My favorite pairing with a cheddar-bake is either the Original Club Sandwich or Tail-On Shrimp Dinner.  It adds to the dinner, that home-style cooking taste. 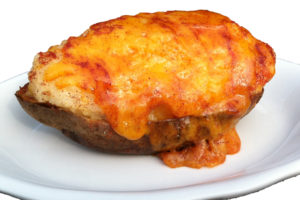