“I’m TJ Hilliard, grandson of Carey Hilliard. I want to take a moment to thank you for a great year…Thank you for being a loyal customer. You, our regular customer are the cornerstone of our business. This year is our 58th year in business, and a record sales year for us. We’re really proud of that. “ ~tj

In 1960, Carey opened his restaurant dream in the old National Root Beer stand on the corner of Skidaway Rd. and Sunset Drive. This was Carey’s second attempt at the restaurant business. At age 13, shortly after his mother died, he hitch-hiked to Savannah for a new beginning.

His two brothers, Dick, and Bill, already owned
established restaurants. Dick owned a chicken place in Jesup, and Bill owned a seafood restaurant and bar nearby on Victory Drive-the old “Bill Hilliard’s.” Carey failed on his first try, so he went to work at a sulfur plant on the Savannah river, American Cyanamid that opened in 1955, formerly known as Kemira. Discontent, he tried opening again, and this time had a huge success.

all in the family
Carey and his wife, Kathleen, reimagined family-priced dining with the convenience of take-out and curbside service. By the 1960’s drive-ups were closing & replaced by a drive-thru, but Carey bucked the trend. He kept the old drive-up we now call the “curb!” 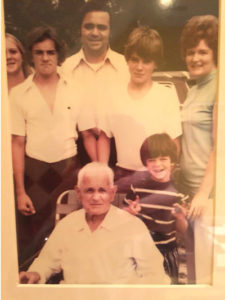 Kathleen insisted that beer and wine be hidden from the menu to stay in the good graces of the Sunday church crowd; and it remains so today! Kathleen had 4 children: Sheryl; Carey, Jr.; Timmy; and Jeff. Kathleen would often bring the oldest kids in with her during lunch, giving Carey a much needed rest before working all night until 1-am. Their kids-including Tim, were raised bussing tables; Kathleen had them dressed in matching outfits.

tragedy & a new leader
On December 11, 1982 Carey and his wife Kathleen, tragically died in a plane crash. At just 23 years old, Tim returned to Savannah taking the role of President & CEO. “It was a Do or Die time for the restaurants and there were offers to buy the stores for pennies on the dollar,” he said. Instead, Tim decided to keeping moving forward and the rest is history! He built another restaurant on the West side of Savannah, on Hwy 21 in 1996. A decade later, he built the Pooler location. Tim overcame his fear of flying with the help of long-time family pilot Jesse Payton. Jesse and Tim flew countless trips from Savannah to Charleston as Tim managed those stores for 25 years. Recently, Tim has guided the stores to the most prosperous years ever, beginning in 2017.

the classics
Hand-battered onion rings and fresh fried shrimp. Classics…Just like that secret recipe barbecue sauce and brunswick stew that never gets old. We’ll never stray from tradition, passing the secret sauce down from generation to generation. So, when you bring your future grand-kids here, you can bet the Brunswick Stew is the same as it was fifty years ago. Promise.

the generations
When they were young, Tim’s children, T.J. and Ashlea worked cooking and serving. They’re still here today, carrying on the family tradition and keeping true to the mission: Quick and friendly service, quality food, and family pricing.