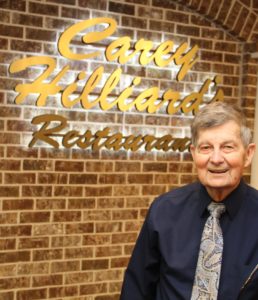 It’s with heavy hearts today, that we report on Billy Gunn’s (Gunn’s) passing.   Sadly, he fell ill while working at the Abercorn store the night of Monday May 13th, a place he loved so dearly.  Besides relaxing at “The River,” a hunting cabin about an hour west of here, I can’t think of any other place Gunn would have wanted to be.

Gunn survived health scares in the past, always coming back “feeling better than ever.”  His resilience, along with Gunn’s unbridled passion and love for Carey Hilliard’s was remarkable.

About five years ago,  Gunn began his public relations role at the restaurant, talking with customers while they ate – three nights a week at the Abercorn location.  Beaming he’d often show-off his Rolex watch, a retirement gift that marked his 40th career anniversary.

Gunn was hired in 1968 as a store manager, when there was an innocence of the country.  “We didn’t lock our doors at night” he said.

In the store, each table had its own jukebox where you would put a dime or quarter in to play the latest hits. We had cigarette machines and pay-phones in our lobby, things you don’t see too much anymore.”

He enjoyed talking with familiar faces and Regulars…but they enjoyed it more. Customers walked into the store just so they could speak with him.

He was such a wealth of information and history, that he inspired me to start a video series called a Hilliard’s History Moment.  The first episode featured “Billy Gunn:  How I was hired.”  This was a story about how, in 1968, Gunn was hired by my grandfather Carey Hilliard – personally, as Kathleen (his wife) “needed to stay home and raise Timmy” (their middle-son).  I’ll save the rest of the story for you in the video.

Gunn’s stories about the past, all 50 years, had a running theme.  There were filled with pride for his company.  He was proud of  “the tiny mom-and-pop barbecue restaurant that became a staple in Savannah,”  his words.  This all began with Carey Sr. treating customers and staff as family, Gunn explained.

He made everyone feel as if they were special. He was really great to his employees and would do anything for them. In fact, when the original restaurant burned down, the first thing he thought about was how his employees would pay their bills while the new restaurant was being built.  The problem was solved when Hilliard rented the nearby Larry’s Restaurant during the construction.

Gunn said that Carey was like an older brother to him.  Gunn tagged along with Carey, who often took the boat out late at night, especially during a full-moon.

You see, Carey was raised by his aunt in Odum; his mother died when Carey was young, and his father was a coon hunter who basically lived in the woods. He never once forgot where he came from and was grateful for every success.  Carey with his newfound success, built his dad a house.  Grandpa Hilliard refused to move in, saying that it was too nice, and preferred living in the woods, where success was measured in coon skins.  Carey, not to be defeated by Grandpa Hilliard’s measured of success, decided to supply him with skins….Carey and I would take his boat out at 2am, arriving back at the dock for Kathleen (Carey’s wife) to cook us breakfast.

Gunn’s presence will be felt long after today.  Culturally, professionally, and personally, he meant so much to this company.  He was a reflection of its past, present, and bright future.  We know he’s looking down today, proud to be a part of the Carey Hilliard’s family.  But now, we mourn his loss.